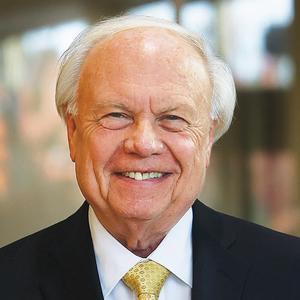 Professor Robert A. Stein ’61 rejoined the faculty as Everett Fraser Professor of Law in the fall of 2006. He teaches a Seminar on the Rule of Law, a course on the Great Cases that have Shaped the Nation, and a course on Estate Planning. In 2017 Professor Stein received the University President’s Award for Outstanding Service, and in 2016 received the University’s Global Engagement Award.

Previously, from 1994 to 2006, Professor Stein was the Executive Director and Chief Operating Officer of the American Bar Association (ABA). He was responsible for management of the world's largest professional membership association, with more than 400,000 members and a 900-person staff at the ABA's headquarters in Chicago and in its Washington, D.C., office.

Professor Stein is Of Counsel to the law firm of Gray Plant Mooty. He is a Commissioner from Minnesota to the Uniform Law Commission, and was president of the National Conference from 2009-11. He has been a member of the Council of the American Law Institute for more than 25 years, and served on its Executive Committee and as an advisor to several of the Institute's Restatements.

Professor Stein holds leadership positions in numerous organizations. He served as Co-Chair of the International Bar Association Rule of Law Action Group and, prior to that, served as Chair of the London-based IBA's Professional and Public Interest Division. He is a member of the Board of Directors of the American Friends of Uppsala University; he is a delegate in the American Bar Association's policy-making House of Delegates; and, he has been Co-Chair of the Minnesota Fellows of the American Bar Foundation. He is Past President of the University of Minnesota Alumni Association and served as a charter member of the Minnesota Law Review Advisory Board.

He served as a Trustee of Great Northern Iron Ore Properties and is Director Emeritus of the Educational Credit Management Corporation.

U.S. Supreme Court and Great Cases that have Shaped the Nation

Robert Stein in the news