Minnesota Law students have helped win a decisive second victory allowing a man to reunite with family in the United States and potentially sparing others from unlawful repeated removal actions in a key ruling from the U.S. Court of Appeals for the Sixth Circuit.

“You get one fair chance to bring a case, and after that even if you are the federal government, you don’t get a second bite at the apple,” she continued.

Read more in a special online-only feature in our spring 2022 edition of Minnesota Law magazine. 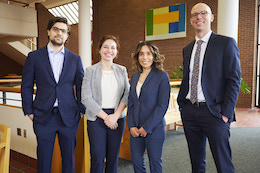