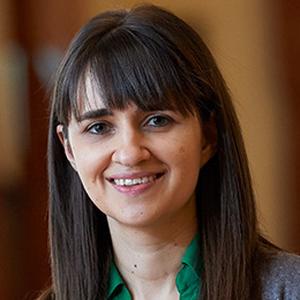 In addition to her work at the law school, Ponomarenko is co-founder and counsel at the Policing Project, a non-profit based at the NYU School of Law that works in tandem with policing agencies and community groups to promote more effective police governance. She also is an Associate Reporter for the American Law Institute’s Principles of the Law: Policing project.

In 2021, she was named the Stanley V. Kinyon Tenure-Track Teacher of the Year.

Ponomarenko holds a B.A. in History and Economics and an M.A. in the Social Sciences from the University of Chicago, and a Ph.D. in History from Stanford University.

The Department of Justice and the Limits of the New Deal State, 1933–1945 (unpublished Ph.D. dissertation, Stanford University, Department of History, 2011)
Open Access

Maria Ponomarenko in the news