2L Testifies at House Hearing on Constitutional Amendment She Proposed

Kristin Trapp, 2L, recently had the once-in-a-lifetime experience of testifying before a committee of lawmakers on the merits of a constitutional amendment that she conceived of and helped draft.

On Feb. 26, Trapp appeared before the Minnesota House’s Government Operations Committee to speak in support of her proposal to swap out gender-specific language from the Minnesota Constitution for gender-neutral terms. For example, rather than referring to a senator as “he” in subsequent references, the state Constitution would repeat the word “senator” throughout.

Trapp came up with the idea for the amendment while she was working as a legislative assistant in the Minnesota State Senate in 2018. “Oftentimes, I would flip through prior legislation and the Constitution. It saddened me to see that everyone was referred to as ‘he,’ and that no one bothered to change that,” she says. She proposed the changes to her boss, Sen. Sandra L. Pappas, and Pappas agreed to serve as chief author and introduce the bill (S.F. 522).

In fall 2018, Trapp left her legislative job to start her 1L year at Minnesota Law. A human rights fellow, she continued her advocacy work at law school, pursuing feminist legal theory as a note/comment editor for the Journal of Law and Inequality. She is currently working on a note for the journal on how women’s issues are omitted from the annual State Department Reports and the impact of that on female asylum seekers.

The constitutional change initiative did not appear to have any momentum until last week, when Trapp received an invitation to testify before the House committee.

“I was grateful to have had the opportunity to discuss why it’s important for our Constitution to include all Minnesotans,” Trapp says, adding that the bill enjoys bipartisan support in the House.

While the genesis of her testimony was from her pre-law school legislative work, Trapp says her legal training played a big part in making her appearance a success.

“Minnesota Law has given me so many opportunities to develop my public speaking skills and feel comfortable speaking on the fly,” she explains. “For example, my experience in hearing prep for the Immigration and Human Rights Clinic helped me learn how to think on my feet. In evidence drafting, I was working on persuasion and public speaking every week, and Professor [Mitch] Zamoff gave me a lot of encouragement and feedback. … Minnesota Law also empowers you by cultivating your skills, encouraging you to try new things, and supporting you all the way. For example, Professor [Heidi] Kitrosser helped me write an opinion piece on the amendment that was published in the Star Tribune; Professor [Jill] Hasday encouraged me to use the bill as the basis for my research paper in her sex-discrimination class.”

The bill was ultimately referred to another House Committee for consideration. Not one to rest on her laurels, Trapp spent time immediately after her testimony lobbying to get the bill a hearing in the Senate.

“It’s been good to remind myself that if you see something that you want changed, go for it!” says Trapp. “This all came to be because I was simply annoyed by how out of date our constitutional language was, that’s it. Anyone can get involved in government and share their skills and vision, but the first step is trying.”

Trapp has not yet settled on what area of law she will ultimately focus on, but says wherever she lands a feminist lens will guide her practice. “Advocating for women’s equality happens in all sectors, courtrooms, and boardrooms,” she explains. “It’s not just a public interest issue and it’s not an issue of the past. And that’s part of what my bill is about— our state Constitution has excluded women for 163 years and there’s been no movement to change that until now. A lot of work lies ahead, and I am excited to see what my role can be.”

—By Mark A. Cohen 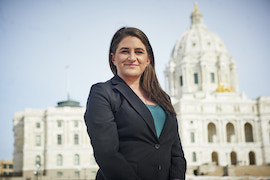 Kristin Trapp, 2L, testified before a House committee on Feb. 25 on a proposed amendment to eliminate gender-specific references from the Minnesota Constitution