In a lively keynote address delivered at the Minnesota Law Review’s 2018 Symposium, U.S. District Court Judge Jed Rakoff said that levying fines against large financial institutions is an insufficient deterrent to stop them from breaking the law.

Rakoff, who sits in the Southern District of New York and has presided over a number of high-profile cases against banks and other major financial industry players, said that shareholders have shown a willingness to absorb the fines as a cost of doing business. As a result, boards often leave in place management responsible for the misconduct that leads to the fine.

Rakoff also said another common remedy in financial crimes cases—deferring prosecution subject to certain conditions—is also ineffective in dissuading management from behaving badly. Because the likely result of failing to live up to the conditions is the government imposing a fine on the company—and management is generally not punished when such a fine is imposed—executives have nothing to fear. “Prosecuting high-level individuals is the best deterrent,” Rakoff said, adding that the one thing that puts fear and terror in executives’ minds is the prospect of jail time. “A corporation does not commit a crime. An individual makes the decision whether to commit a crime or not.”

Rakoff noted that the government often agrees to financial settlements and deferred prosecutions because putting together a case to prosecute a high-level corporate executive can take years of investigation and other legwork. However, no other government action works as well in stopping future financial crimes as prosecuting the corporate leaders who commissioned it, he said.

In answer to a question about whether the government would wind up jailing only lower-level employees because the high-level ones know how to cover their tracks, Rakoff responded that high-level executives “are not as smart as you think.” Rakoff, who spent 15 years in white-collar criminal defense prior to joining the bench, said his clients frequently vastly overestimated their ability to conceal their crimes. 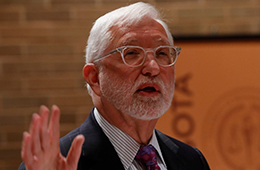