Fabiola Gretzinger ’22 helps maintain a global perspective on abortion laws as a legal fellow at the Center for Reproductive Rights in Washington, D.C.

From that lens, Gretzinger sees a “wake-up call” in the U.S. Supreme Court’s ruling in Dobbs v. Jackson Women’s Health. The court’s ruling in June ended the constitutional right to abortion established nearly 50 years ago in its Roe v. Wade opinion, now enabling states to impose their own bans.

“Emotionally, it was difficult and it was a big step back,” says Grezinger, referring her own personal beliefs rather than speaking for the center. “If anything, it’s inspired us to keep fighting. Seeing what came from the Dobbs decision, I just don’t think that I’ll stop working on reproductive rights anytime soon.”

In September, Gretzinger began a yearlong fellowship at the center, a nonprofit global human rights organization working to protect reproductive rights around the world through litigation, legal policy and advocacy. She received a Robina Post-Graduate Fellowship, which the Law School awards yearly, to support her role on the center’s Legal Strategies, Innovation and Research team.

“This wouldn’t have been possible without the financial support of the school,” Gretzinger says.

Read more in a special online only extra to the fall 2022 edition of Minnesota Law magazine. 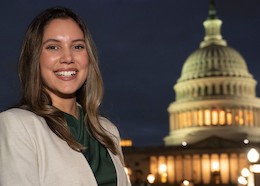