With the world focusing on Minneapolis after George Floyd’s killing and the calls for racial justice that it ignited across the country and around the globe, Minnesota Law has expanded its commitment to incorporate racial equity and justice issues into its curricular and clinical offerings.

New racial equity and justice courses have been added, and faculty members are further integrating these topics into their teaching—not only in classes like Constitutional Law and Criminal Law, but also in numerous other courses ranging from Torts to Mergers & Acquisitions. On the clinical side, more than 100 students and faculty involved in two dozen law clinics—whose clients often are Black, Indigenous, or other people of color—attended a recent training on implicit racial bias.

"Our students understand that the Black community has been in extraordinary pain, and that our society has real work to do to make racial equity and justice a reality for all Americans,” Jenkins explains. “Lawyers and Minnesota Law will need to address these issues head-on. Students want to understand, study, and engage with these issues now so they are prepared to make a difference in our profession.”

“This is Not a Temporary Response”
Faculty and administrators worked through the spring and summer to develop the new courses and find opportunities to address racial equity and justice in existing courses, building on continuing efforts to do so as part of Minnesota Law’s public service mission. This year’s effort came in addition to the need to adapt to teaching remotely in response to the COVID-19 pandemic.

“This is not a temporary response,” says Associate Dean for Academic Affairs William McGeveran. “I see it as an acceleration and continuation of what Minnesota Law has always prided itself on doing. The dean was pretty clear that it was important that the racial reckoning that was happening couldn’t be set aside because we’re dealing with all the pandemic response.”

Minnesota Attorney General Keith Ellison ’90, who is leading the prosecution of the four former Minneapolis police officers charged in Floyd’s killing, returned to Mondale Hall to teach a new course this semester. Ellison approached Jenkins to propose creating a course on law for the public good and serving as instructor for it. The course, Public Interest Advocacy and State Attorney General, addresses the broad jurisdiction and responsibilities of attorneys general as well as the challenges and ethics issues they face.

Ramsey County District Judge Nicole Starr ’03 is teaching another recently added course, Race and the Law: Systems, Structures, and Solutions. Students in the class will produce a final paper that identifies a community harm and proposes solutions, which they will present to community members for feedback.

The aftermath of Floyd’s killing prompted the return of the existing International Human Rights course, which originally was not on the fall schedule. Professor Fionnuala D. Ní Aoláin, U.N. Special Rapporteur on the promotion and protection of human rights while countering terrorism, decided to offer the course again now because she was doing a lot of work “on the intersection of human rights on the international stage and racial justice in the U.S.,” McGeveran says.

In her Torts class, Professor Alexandra Klass dedicated more class discussion time to qualified immunity defenses for police officers accused of excessive force and other intentional torts. She also held an optional one-hour Zoom session for her 1L section on the criminal and civil law aspects of the Breonna Taylor killing, providing students an opportunity to ask questions. Klass invited Professor Maria Ponomarenko, who has researched and written on policing issues, to participate in the discussion.

In her M&A class, Professor Claire Hill added a special session on Race, Ethnicity and Gender. The session will be a conversation among Professor Hill, Professor June Carbone, and Professor Afra Afsharipour senior associate dean for academic affairs at UC Davis School of Law.

“We think it’s really important for our students to understand the roles that racial difference and implicit racial biases play in the representation of clients, and to begin to identify and unpack their own biases,” says Professor Perry Moriearty, co-director of the Law School’s clinical program. “We all have biases, no matter who we are, what we look like, and where we’re from.”

A clinical faculty subcommittee on racial equity also is working on a statement to reaffirm the law clinics’ commitment to racial equity and awareness of “systemic racism and the role that it plays in the work that we do and the lives of our clients,” says Moriearty, who is co-teaching the George Floyd’s Minneapolis course with Jenkins. “We are training upcoming lawyers that these are things we must acknowledge and actively confront.”

Outside-the-Classroom Offerings
Adding to the academic experience is the Big 10 Law School Speaker Series, which Dean Jenkins is encouraging faculty and staff as well as students to watch. Jenkins co-organized the 12-week series, which consists of weekly lectures, hosted on Zoom, relating to race, law, equality, and other relevant issues. On Sept. 23, Ní Aoláin was the featured lecturer; she addressed human rights in a time of pandemic.

Assistant Dean of Students Erin Keyes ’00 is leading another speaker series in which faculty members collaborate with speakers from around the country to present virtual discussions on racial justice topics. Over the summer, this series included such topics as:

Additional information and links are available at the Law School's Commitment to Racial Justice webpage. 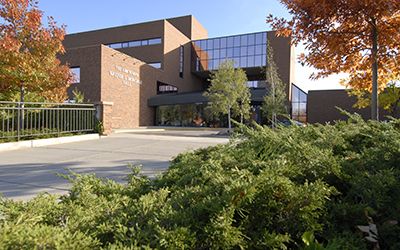