Richard Allyn ’69 of Robins Kaplan, Erin Osborne ’13 of Central Minnesota Legal Services (CMLS), and Marisa Tillman, 3L, have all been recognized by the Minnesota Justice Foundation with Outstanding Service Awards.

Allyn, who is being recognized for private practice pro bono, co-founded Minnesota Law’s Insurance Law Clinic and has been an adjunct professor in the clinic since its inception. Among the clinic’s victories was procuring a settlement for an arson victim who was originally denied homeowner’s coverage after her house was burned down by her ex-husband. (The case was profiled by KARE 11.) In an auto-accident case, the clinic got an unfavorable ruling against a policyholder, who had originally proceeded pro se, vacated.

Osborne, who is being recognized as a direct service provider, has been a staff attorney with the Minneapolis office of CMLS since 2015. She is currently program director of its domestic violence litigation in partnership with the Hennepin County Domestic Abuse Service Center. She has represented hundreds of clients during her employment at CMLS. She has consistently had a high caseload and is a leader in the program in both number of cases handled and number of full representation cases handled. One example of her many accomplishments was obtaining a $20,000 restitution order in an Order for Protection Case.

Tillman is being recognized with a law student award for her strong history of commitment to public interest. Starting before law school, Tillman was very involved in her community serving as a refugee intern and mentor through Lutheran Social Services, an intern with Chicano Latino Affairs Council, and as a legal assistant with Lutheran Volunteer Corps through World Relief Immigration Clinic. At the Law School, she participated in the Asylum Law Project with the Capital Area Immigrants’ Rights Coalition. She was also a certified student attorney with the Binger Center for New Americans’ Detainee Rights Clinic. This summer, Tillman is working with Standpoint, where she supports and assists immigrant survivors of domestic and sexual violence.

The three will be publicly recognized at MJF’s first ever online Awards Celebration. The free event, which will be held at 4:30 p.m. on Sept. 30, will feature keynote speaker Ivan Fong. 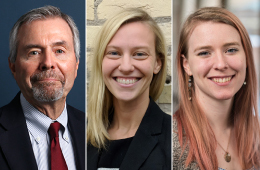