Heather Abraham (’12) has been awarded a two-year postgraduate fellowship through Equal Justice Works, a nonprofit organization whose mission is “mobilizing the next generation of lawyers committed to equal justice.” Abraham will spend the term of her fellowship at Legal Services of Northern Michigan, in Traverse City, representing homeless adults and low-income renters at imminent risk of homelessness. She plans to launch a problem-solving “Street Outreach Court” that will allow homeless defendants and low-income renters facing homelessness to have a fresh start on overcoming rural homelessness by dismissing cumulative legal fines, bench warrants, and jail time through nonmonetary means like self-restorative programs, such as addiction recovery.

During her time at the Law School, Abraham volunteered more than 300 hours with the Minnesota Justice Foundation doing pro bono activities. As a student, she clerked for Mid-Minnesota Legal Aid in the housing division, worked as a Robina Policy Fellow for the National Law Center on Homelessness and Poverty, and represented survivors of domestic violence at Legal Services of South Central Michigan. Prior to law school, she worked on the legislative staff of U.S. Senator Amy Klobuchar in Washington, D.C. While living in Washington, she actively volunteered with homeless adults, which informed her decision to become a homeless-rights advocate. Since graduating from the Law School in 2012, Abraham has held three judicial clerkships in the federal courts, including her current position with Judge Richard Griffin of the U.S. Court of Appeals for the 6th Circuit.

“Heather is genuinely socially committed… in an age when participation in the political process is minimal and the younger generation is less engaged,” said Professor Myron Orfield. “She truly has a deep and abiding commitment to legal reform and a public life.” 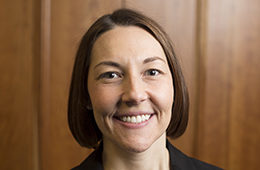