A team of three students from the Law School has won the 2016 Clara Barton International Humanitarian Law Competition, which is conducted by the American Red Cross. Team members Anne Dutton, Griffin Ferry, and Dane Rockow, all 3Ls, traveled to Seattle for the competition, defeating the team from Harvard Law School in the final round. Rockow and Dutton placed first and second, respectively, in the Best Oralist category.

Named after the founder of the American Red Cross, the annual event is a simulation-based role-playing exercise that requires participants to engage with the kinds of real-world challenges that face practitioners of international humanitarian law during armed conflicts. Participants explore the application of the law through fictional but realistic case studies of armed conflict—and the terms of these case studies evolve throughout the event, meaning competitors must present, advocate for, and defend positions to a diverse range of stakeholders in a complex and dynamic legal environment.

“This group of exceptional students did an outstanding job in winning the Clara Barton competition,” said Professor Fionnuala Ní Aoláin, the team’s advisor. “They worked diligently this year immersing themselves in the details of the theory and practice of the laws of war. All showed innovation, creativity, and passion. Anne, Griffin, and Dane have exhibited a sustained commitment to international law and human rights practice. All have extraordinary careers ahead of them. It was a privilege to be their faculty advisor.”

Speaking for the team, Rockow said, “We’d like to thank the Human Rights Center for making our participation possible, as well as the great international law faculty for helping prepare us through classes and individual review sessions. Professor Ní Aoláin, Professor Oren Gross, and Dean David Wippman all deserve the credit for our performance.” 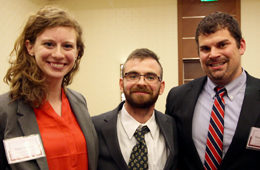