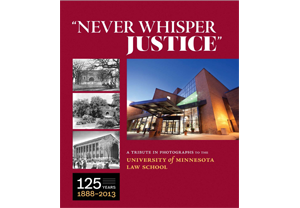 A Tribute in Photographs to the University of Minnesota Law School 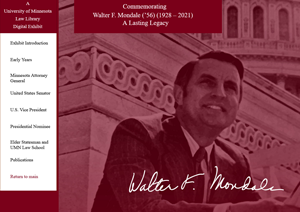 Vice President Walter Mondale (’56) (1928-2021) left an indelible legacy during an extraordinary career. This exhibit provides an overview of Vice President Mondale’s career, from his formative years to his contributions as a global statesman. The exhibit also emphasizes his valued relationship of more than sixty years with the University of Minnesota Law School, whose building bears his name. A Witness to Barbarism: Horace R. Hansen and the Dachau War Crimes Trials

“A Witness to Barbarism: Horace R. Hansen and the Dachau War Crimes Trials." details the World War II service of Horace R. Hansen (1910-1995), a St. Paul native, UMN graduate, and a lead prosecutor who prepared cases for the Dachau war crimes trials (1945-1947). The exhibit also describes the main Dachau camp trial and the genesis of Hansen’s later book about his experience, Witness to Barbarism (2002). Law and the Struggle for Racial Justice

“Law and the Struggle for Racial Justice” highlights rare collection material related to the Black American struggle for equal rights, as seen in cases, legislation, and the evolving aims and achievements of civil rights movements. The exhibit calls attention to historical exclusion, to moments of progress, and to ongoing obstacles faced by communities of color as they have sought racial justice.

"Noted and Notable: Treasures of the Riesenfeld Rare Books Research Center," invites viewers to consider the law books, letters, and other legal documents included here as physical artifacts that capture the histories of individual copies. From books with unusual bindings, to remarkable former owners and their annotations, the treasures here tell unique stories about the past. “Böcker Har Sina Öden (Books Have Their Destinies),” features eight notable volumes of rare Swedish law in the Riesenfeld Center's collections, chosen and described by Professor Eric Bylander, Uppsala University Faculty of Law. Professor Bylander highlights here the fruit of his research into these notable volumes and their remarkable former Swedish owners, and his own passion for rare books and book collecting. 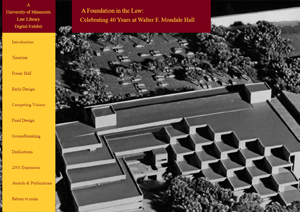 A Foundation in the Law: Celebrating 40 Years at Walter F. Mondale Hall

The University of Minnesota Law Library is pleased to announce the release of a new digital exhibit, “A Foundation in the Law: Celebrating 40 Years at Walter F. Mondale Hall.” In 2018, the Law Library celebrated the 40th anniversary of Walter F. Mondale Hall with this year-long exhibit that spotlights the history of the building and the rich tradition of legal education that thrives within its walls. 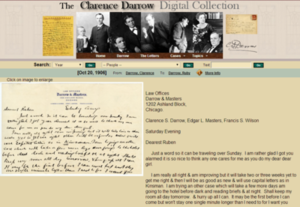 The University of Minnesota Law Library is pleased to provide access to an extensive body of information about the great American jurist Clarence Darrow. The site includes an extraordinary collection of personal letters written by and to Clarence Darrow. These letters include correspondence with Darrow's family members as well as with many other prominent individuals who influenced the development of American law during the first half of the 20th Century. In addition, the site has sections focused on both Darrow's famous and lesser known trials. 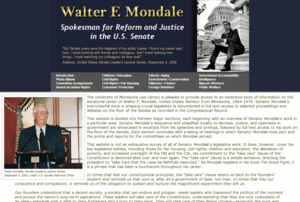 Walter F. Mondale
Spokesman for Reform and Justice in the U.S. Senate

The University of Minnesota Law Library is pleased to provide access to an extensive body of information on the senatorial career of Walter F. Mondale, United States Senator from Minnesota, 1964-1976. Senator Mondale's instrumental work in shaping crucial legislation is documented in full text access to selected proceedings and debates on the floor of the Senate as recorded in the Congressional Record. 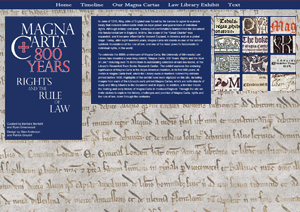 Magna Carta, 800 Years: Rights and the Rule of Law

To celebrate the 800th anniversary of Magna Carta, the University of Minnesota Law Library has digitized its year-long exhibit, "Magna Carta, 800 Years: Rights and the Rule of Law," including over 75 items from its outstanding collection of rare law books, held at the Library's Riesenfeld Rare Books Research Center. The exhibit explores the enduring significance of Magna Carta in the Anglo-American tradition, in its first 800 years.

“Transitional Justice in Historical Perspective” showcases historical works concerning post-conflict justice and reconciliation. Drawn from the Library’s rich rare books collection, highlights include the first commentary on a peace treaty, the treason trial of King Charles I, and U.S. military manuals of a Dachau war crimes prosecutor. The exhibit invites viewers to consider transitional justice in a historical and comparative perspective. 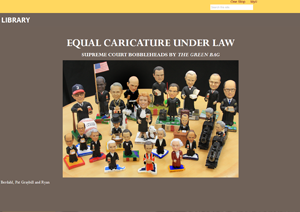 The Supreme Court bobbleheads have become prized collectibles. The bobbling figurines, produced by The Green Bag and its editor, Professor Ross Davies, have delighted the bench and bar since 2003. In 2016, the Law Library exhibited its complete collection, based on a generous donation by the Hon. James M. Rosenbaum (‘69), Federal District Court Judge for the District of Minnesota (ret.). This digital exhibit showcases these artful and popular caricatures. 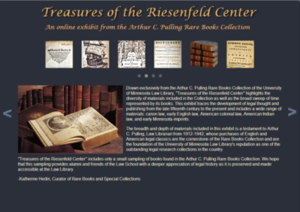 Treasures of the Riesenfeld Center
An online exhibit from the Arthur C. Pulling Rare Books Collection

Drawn exclusively from the Arthur C. Pulling Rare Books Collection of the University of Minnesota Law Library, "Treasures of the Riesenfeld Center" highlights the diversity of materials included in the Collection as well as the broad sweep of time represented by its books. This exhibit traces the development of legal thought and publishing from the late fifteenth century to the present and includes a wide range of materials: canon law, early English law, American colonial law, American Indian law, and early Minnesota imprints.

From the consolidation of English power in 1691 until well into the nineteenth century, religion was the gulf which divided the colonial rulers of Ireland from the native majority. This sectarian division resulted from deliberate government policy. It reached into political, economic, and personal life, through a series of statutes known as the Penal Laws. This site contains the texts of these laws.