The ABA Section of Taxation has announced that Frank DiPietro (’14) is a recipient of the Christine A. Brunswick Public Service Fellowship for 2015-17. During the term of his fellowship, DiPietro will work with the Law School's Center for New Americans and its Robert M. Mankoff Tax Clinic to help immigrants deal with tax issues that may prevent them from becoming U.S. citizens. DiPietro also plans to work with the Tax Clinic and the Minnesota Assistance Council for Veterans to provide tax and legal advice to veterans, particularly those on fixed incomes.

The ABA Section of Taxation created the Public Service Fellowship program in 2008 to address the need for tax legal assistance among low-income communities and those in which familiarity with the tax system may be lacking. In 2013, the program was renamed in honor of the late Christine A. Brunswick, who, as executive director of the Section of Taxation for more than 20 years, was a strong proponent of advancing public service efforts in tax law and fostering a fair and equitable tax system.

DiPietro points out that taxes can affect immigrants' lives and futures in perhaps unexpected ways. "Applicants for citizenship must show 'good moral character' by complying with U.S. tax laws—but often, paying taxes is a new concept for immigrants," he says. "Common mistakes with respect to filing status, tax I.D. numbers, and dependent exemptions can block their chance at becoming citizens. There are also tax preparers who prey on undocumented immigrants by preparing fraudulent tax returns, which can get them into legal problems they can't solve on their own." In addition to dealing with such matters, DiPietro plans to create a community outreach program that will help immigrants choose reputable tax preparers and avoid tax problems in the first place.

These are not new issues for DiPietro. On Feb. 11, he represented a petitioner against the IRS before the 8th Circuit Court of Appeals. His client is an immigrant who does not speak English, and DiPietro began working on the case when he was a student in the Tax Clinic.

"We are thrilled to have Frank DiPietro join the clinic as an ABA Public Interest Fellow," said Tax Clinic Professor Kathryn Sedo. "The award of the fellowship to Frank is a testament to his dedication to working with low-income and immigrant taxpayers and recognizes the leading role that the Tax Clinic and the Center for New Americans has in providing important and necessary representation to these communities. In particular, this fellowship will allow the clinics to expand our work with veterans and immigrants who desperately need assistance with their tax problems." 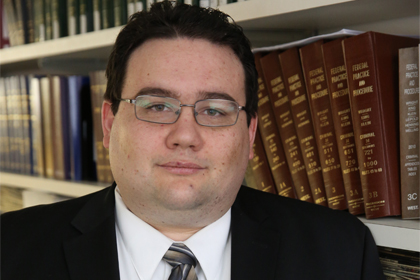