A Legacy of Generosity and the Power of Scholarship Support:

Maysa Alqaisi, a 2L at Minnesota Law, dreamed of becoming a lawyer and advocate from an early age. A first-generation law student and U.S. immigrant, she earned a degree in finance at the University of Texas-Austin. She got her first taste of Minnesota when she interned at Target corporate headquarters as an undergraduate and subsequently applied to Minnesota Law to pursue her goal of becoming a lawyer.

Alqaisi says she was drawn to Minnesota Law because of its high ranking, reputation, valued programs, and accomplished faculty, but the Bill Kampf Scholarship – A Commitment to Social Justice convinced her that Minnesota Law was the right place for her. 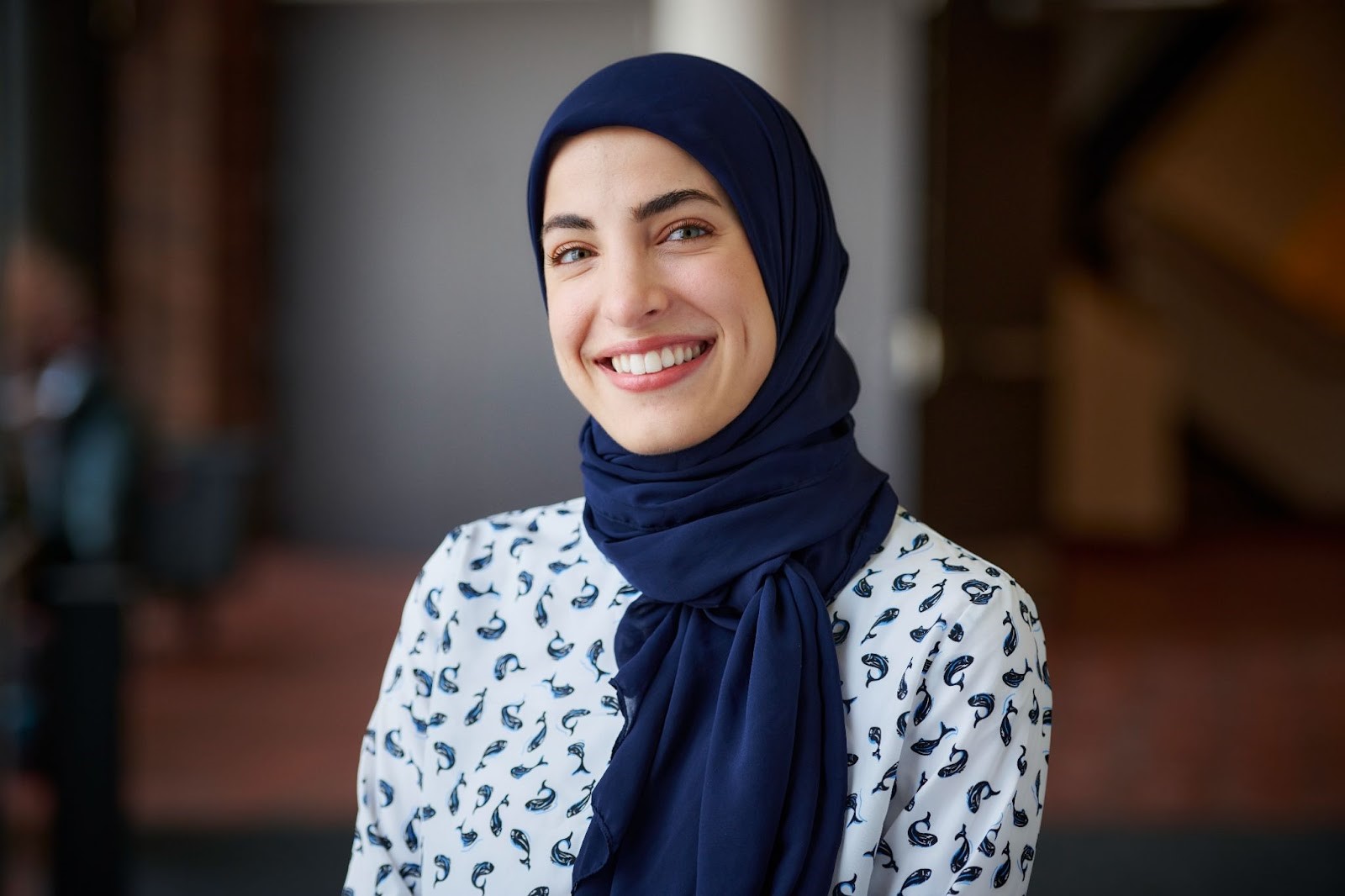 The Kampf Scholarship was established in memory of William I. Kampf ’67, who also served as an adjunct law professor, by his wife Janet Kampf, family, friends, and colleagues at the Minneapolis firm Henson & Efron. Those generous donors saw the importance of supporting new law students like Alqaisi who have a passion for service. Today, the Kampf Scholarship serves as a living legacy to a man whose professional life was committed to the development of a more just society.

When Alqaisi received this scholarship, she realized that she not only wanted Minnesota Law, but that Minnesota Law recognized her passion and believed in her abilities. “Reading the different testimonies of people who knew Professor Kampf, I have been moved by the stories of the inspiration he was to his students and colleagues,” says Alqaisi. “I am humbled and plan to honor his legacy with my legacy.”

As a Kampf Scholar, Alqaisi manages a full schedule of classes while immersing herself in numerous aspects of law school life. She has participated in the Asylum Law Project assisting clients with their immigration cases and appeals, worked in the Mankoff Tax Clinic, served as a research assistant for Professor Jon Lee, and is the current president of the Muslim Law Student Association.

Alqaisi plans to work with Kirkland & Ellis in Dallas the summer after her 2L year, using the skills she has learned at Minnesota Law to create positive change in her community.

“This scholarship enabled me to commit to an elite school like the University of Minnesota, and I am grateful for my donors who were holding the rope on the other end pulling me up to my success,”she says. “I cannot express how life-changing it is to be the recipient of such meaningful support towards my long-held dreams. I hope to pay it forward one day and carry on the legacy of giving back and empowering young students to accomplish their dreams in the legal world.”

Show your support of future generations of Kampf Scholars at Minnesota Law!

Benjamin Cooper, a current 3L at Minnesota Law, has always had a deep interest in legal policy and its impact on communities.

After graduating from St. Olaf College, Cooper moved to Minneapolis and began work as a Legal Services Coordinator at Tubman, a nonprofit organization that helps people who have experienced relationship violence, elder abuse, addiction, sexual exploitation or other forms of trauma.

In addition to safe shelter, mental and chemical health counseling, and other programs, Tubman provides legal services to its clients. While working closely with the volunteer attorneys at Tubman, Cooper witnessed first-hand how a law degree can open doors to a fulfilling career and rewarding civic engagement.

This experience confirmed to Cooper that practicing law was the next step and the right path for him. “I want to solve problems, I like working with people, and I love reading and writing—all things many attorneys do,” explains Cooper. 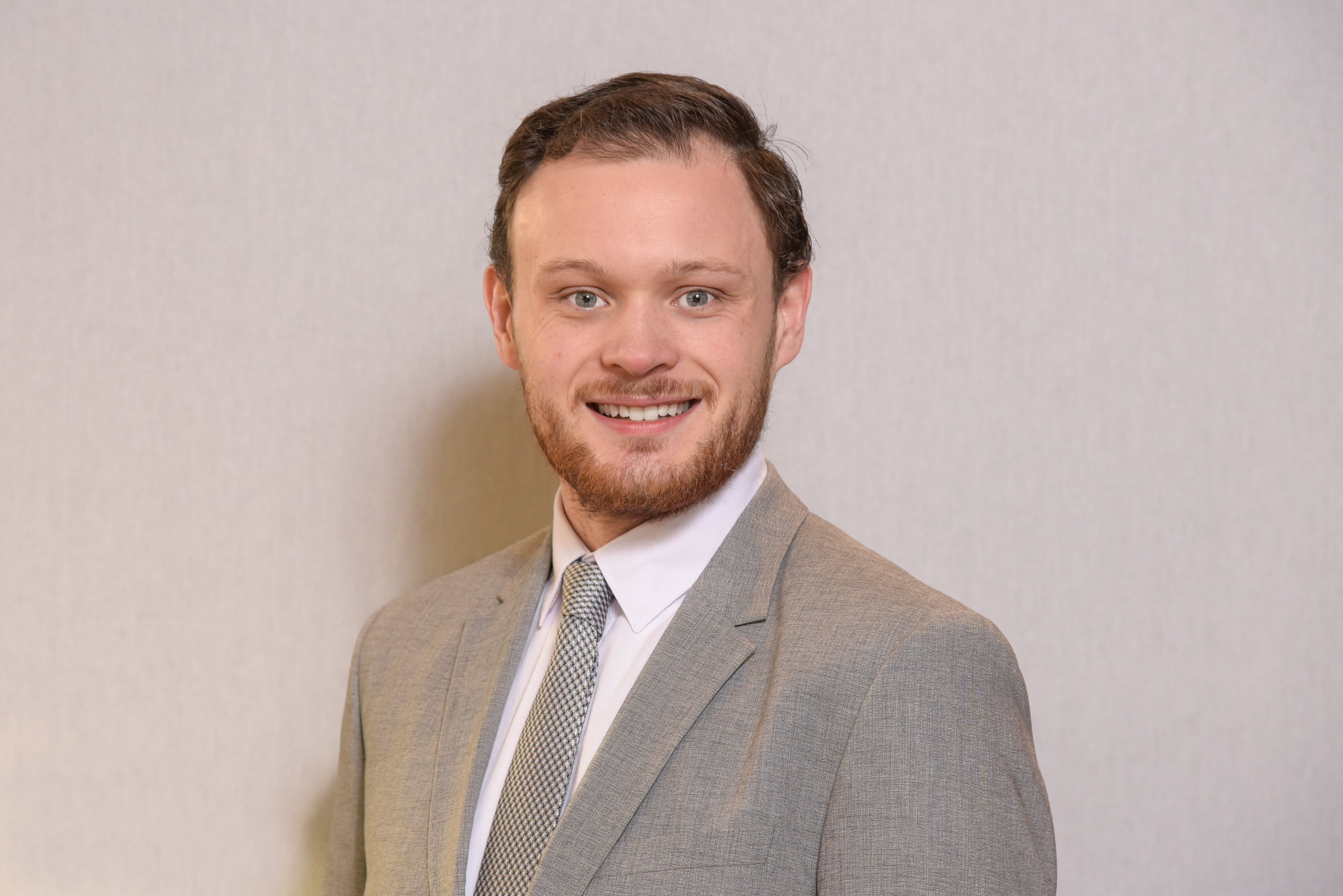 While there are a number of reasons why Cooper chose to attend Minnesota Law, he explains that “scholarship support was a significant factor in my decision about where to attend law school. Every dollar of a scholarship means I need to take out less money in loans. It allows me to make career decisions that are right for me without worrying as much about finances. Also, I know that many scholarships are funded through donations, so scholarship support serves as a proxy for how engaged the law school’s alumni and donor community is.”

As a scholarship recipient, Cooper expresses his gratitude. “Your gifts are deeply appreciated. They make Mondale Hall a place where we can fully engage in law school. Your support of scholarships makes recipients like me and my classmates feel recognized and encouraged.”

Not only is Cooper grateful to attend one of the top public law schools in the country, he is proud to be a part of the active and connected Minnesota Law community. “Knowing that Minnesota Law has a very engaged alumni network is important to me. Coming into law school, I wanted a group of attorneys that I could turn to for advice as I find my way through law school and start my career, and Minnesota Law definitely has that.”

Investing in the Future through Scholarships: Erin Abramovitz

Erin Abramovitz, a current 3L student at Minnesota Law, has always had a passion for helping people, especially empowering marginalized individuals and families. After working in social work for almost five years as a case manager for foster care families, Abramovitz had seen the powerful impact lawyers made in the lives of the kids whose cases she had worked on—for better or worse. She witnessed firsthand the areas of the legal system that are lacking and felt limited in the ways she could make a difference through social work.

Scholarship support has played a vital role in enabling Abramovitz to pursue a career path in public interest law. She explains, “not having the pressure of the looming debt as I graduate has really freed me up to be able to pursue what I actually want to pursue, and I don't think that I would be able to do that otherwise. I would not be thinking about clerking for a state judge, working in family law legal aid, or even working for the county.” 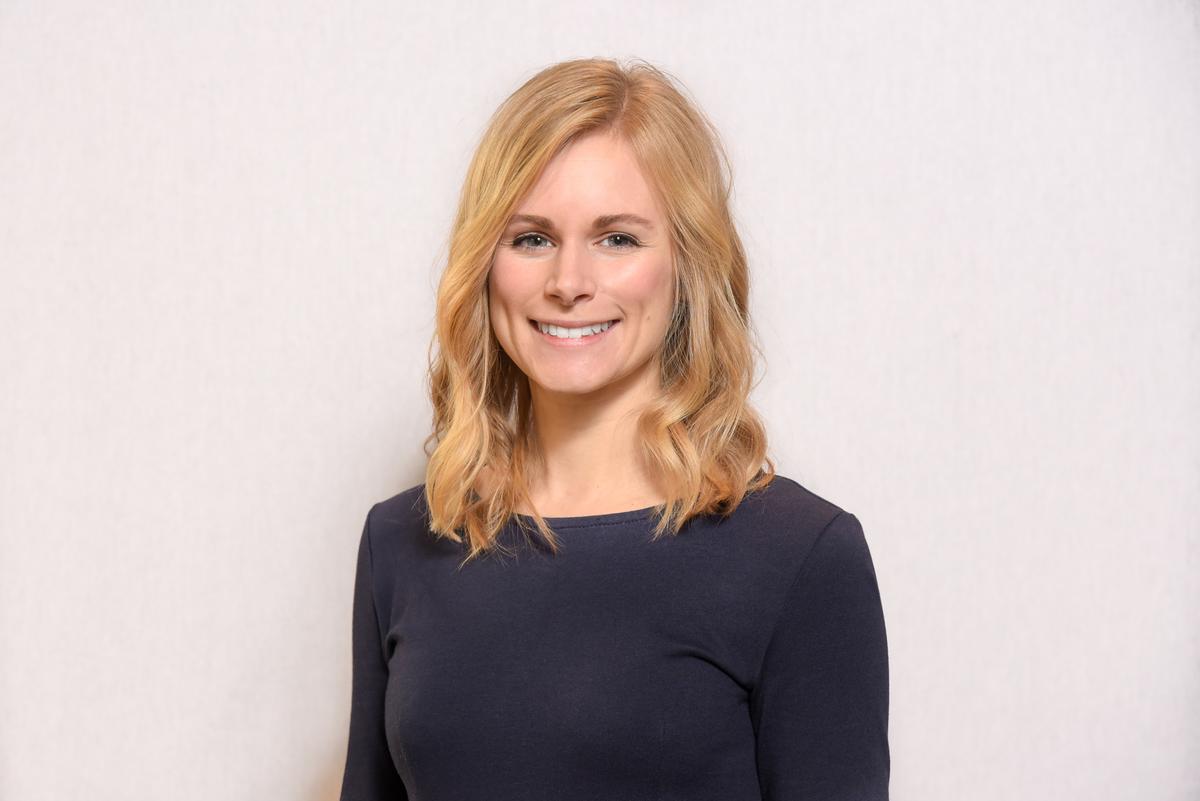 Abramovitz shares that she is grateful to attend Minnesota Law because it embraces its students' diverse backgrounds and unique perspectives instead of expecting everyone to be the same. “I really value that Minnesota Law doesn’t want to change that part of my life [social work], but really build on that experience instead,” states Abramovitz. After graduation, she plans to practice family law and make an impact by utilizing her distinct perspective gained from her time in social work.

“While there are so many organizations and causes one can donate to, I think that it’s so valuable to invest in a person, and I feel like scholarships do that,” says Abramovitz. She expresses that to improve the legal profession and the legal system, it should be more accessible. Making it financially accessible is the first step. “I believe scholarships really help invest in the future of the law and the legal profession," shares Abramovitz.

Current 3L student Camila Pacheco-Forés came to Minnesota Law with an impressive resume including hands-on experience in migrant rights, immigration, and family law. She has completed a Fulbright fellowship in Mexico City and worked as a paralegal for a legal aid organization in Los Angeles. Her time at Minnesota Law has strengthened her desire to use her education to make a difference for underserved communities after graduation. Pacheco-Forés cites the scholarships she received as instrumental to pursuing a career based on passion instead of paycheck. 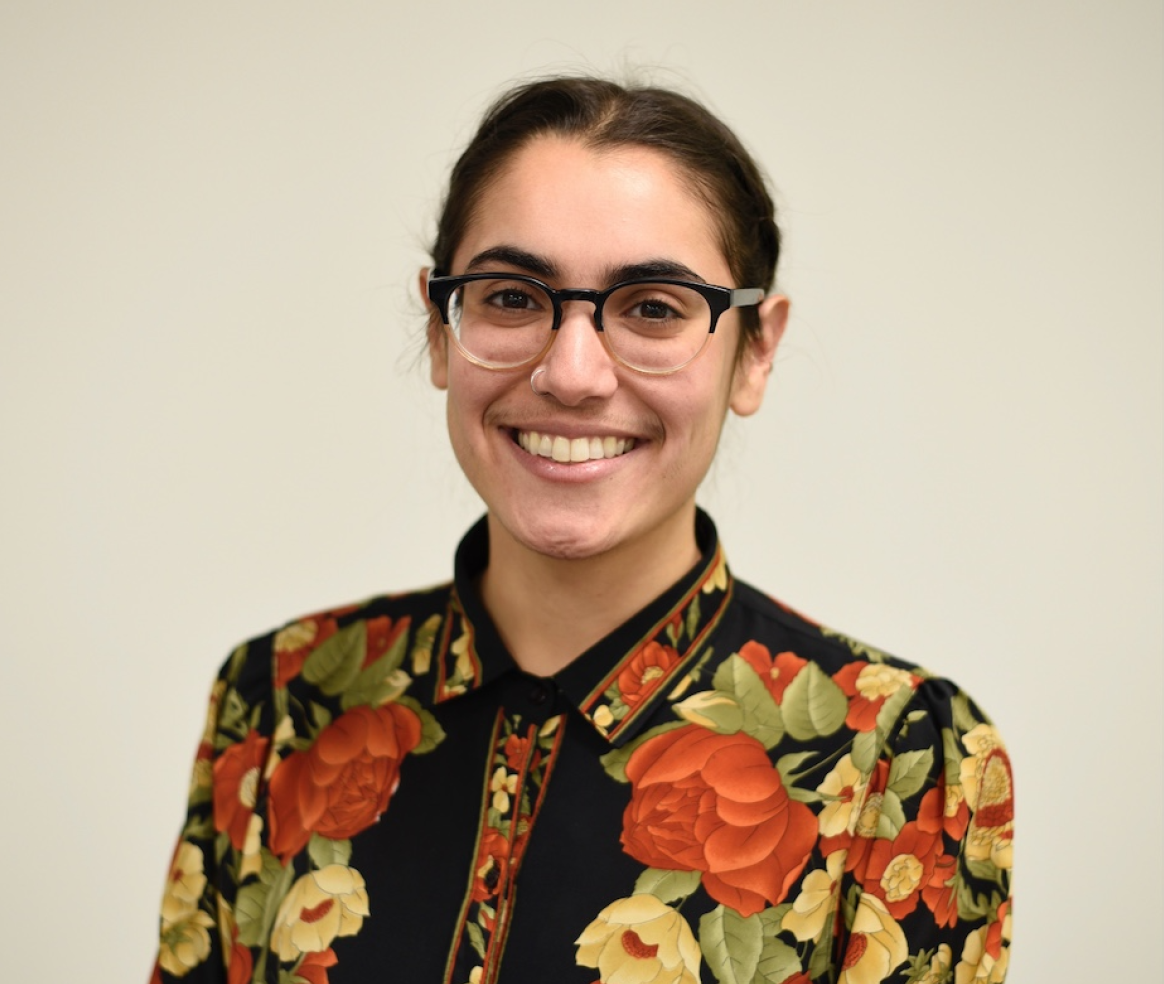 “Scholarship support has been huge for me,” says Pacheco-Forés. “I would not have gone to law school without the financial aid I received. It provides the freedom to choose a career that wouldn’t have been possible with a mountain of student loans. I can think and dream bigger for my career, which is really exciting.”

Fighting for Equity in Immigration Law

“Volunteering with my parents as an interpreter at an asylum clinic sparked my interest in a career in immigration law. As I’ve studied and learned more, I realized that it’s the combination of person-to-person relationships, paired with tackling interesting legal puzzles and finding how your client’s situation fits with the law that I really enjoy” explains Pacheco-Forés. Through experiences and mentorships with attorneys who work in the field, she truly got excited about becoming a lawyer that is compassionate and client-focused.

Pacheco-Forés’ passion for immigration law also stems from her family heritage. Her father is a Venezuelan immigrant and her mother’s family fled as refugees from Cuba. “My grandfather was a lawyer in Cuba for a short time before my family fled to the United States. He never got to be a lawyer here in the U.S., but now I can carry on his legacy,” says Pacheco-Forés. While her family faced some challenges as immigrants, she feels that her family truly benefited from U.S. immigration laws. But Pacheco-Forés shares that not everyone who is seeking a better life through immigration is so lucky. Out of gratitude, Pacheco-Forés feels called to work in public interest immigration law, advocating to make the immigration system more fair and equitable.

The Power of Scholarship Support

Pacheco-Forés explains, “Being a queer woman of color, I know that I'm not well-represented in the legal profession. Having a scholarship not only helps me financially to have some footing when I graduate, but it also helps me feel like I really belong here and that people want me here. Providing scholarships for people who have been underrepresented is not only practically important, but it's also symbolically important. It shows people that they are valued and they have something to bring to this profession.”

You can support students like Benjamin, Erin, and Camila by making a gift to Law School scholarships. 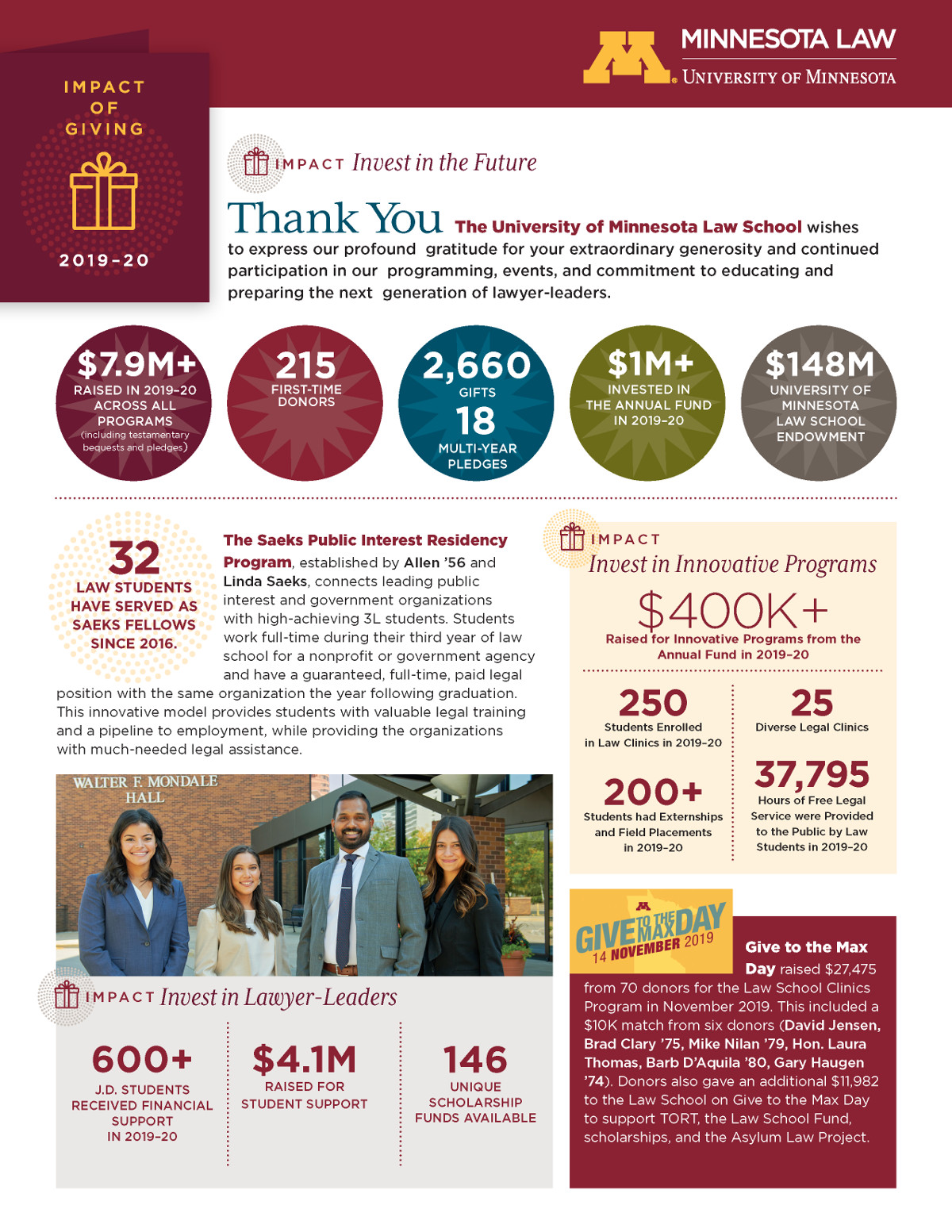